Mike has had cats all of his life and currently having two young cats and one senior cat, he wanted a kitten to join his family. He dropped in at Pet Supplies Plus; met Tiger Lily and was immediately attracted to her aura and energy. Within the week, she was on her way home with Mike to meet her future playmates, Herman and Lily. Now known as Ruby, she is doing fantastic. While Lily is still getting adjusted to having another female in the house, Herman is taking his role as her older brother very seriously and showing her the ropes. Ruby and Herman love to play late at night in front of the television and show off their antics to Dad. Ruby also loves to watch Mike from the window when he goes outside to garden. Mike is working on plans to create an indoor cat “playground” with lots of fun feline activities and says that cats are truly where his heart lies. Ruby is a super cuddly kitten and very lucky to have found her way into Mike’s heart and home! 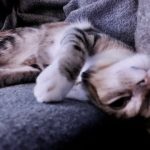 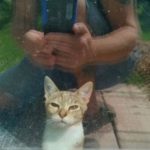