Susanne had been a regular at the dog park with her dog Niki and had met volunteer Dale there, who was Lorenzo’s Woof Pack Leader. Susanne and Tim‘s dog Max had passed away recently and had been a great companion at home for their other dog Kimo, who did not do well at the dog park. When Susanne mentioned to Dale that they were looking for a companion for Kimo, he suggested CK as a possible match. They went to meet CK at a Satchels event and shortly thereafter an introduction was arranged between Kimo and CK. Unfortunately Kimo had too much energy for CK, but as fate would have it, Dale happened to be at Satchels with Lorenzo the day of that introduction and suggested that Kimo and Lorenzo take a walk together. Over the next few weeks, Susanne and Kimo would meet Dale and Lorenzo to walk together. Of course Lorenzo also had to meet Niki which went well and eventually Lorenzo went to Susanne and Tim’s house for a visit with both dogs. It was a very slow and carefully monitored process over time to be sure that all three dogs got along well. Fast forward a few months later and Lorenzo, now known as Lomax has found a very special place with his humans and canine siblings. Initially, Tim was somewhat skeptical about Lomax, but Lomax has bonded very deeply with him. It broke Tim’s heart when Max passed away and Lomax has helped tremendously to lift his spirit; being named Lomax in honor of their dog Max. When Tim returns home in the evening, Lomax has a huge smile on his face and Lomax almost seems to be a “reincarnation” of Max with similar mannerisms, which includes stretching his legs off the couch with paws crossed, exactly as Max used to do. Kimo and Lomax are best buddies at home and Lomax also enjoys going to the dog park with Niki. Lomax has also helped both dogs with some issues. Kimo is no longer high strung and always begging to go out as he gets to play hard all day with Lomax, a great outlet for his high energy. Niki didn’t want to go out of the house this past summer due to the storms and this progressed to Niki refusing to go out even during nice weather; having a few accidents in the house. After Lomax arrived, Niki perked back up, has less anxiety and goes out like a normal dog again and is much more lively. Susanne and Tim also have Rosey, the Cockatoo and Ollie, the bunny. Rosey goes on walks with the dogs, perched on Susanne’s shoulder and Lomax has had a few supervised visits with Ollie and is learning that he is part of the family. Susanne says that it was destiny that brought them together with their “diamond in the rough” and they could not have asked for anything better. With the help of his Woof Pack Leader and this fabulous family that he has been privileged to join, Lomax now has a magnificently full and happy life ahead of him! 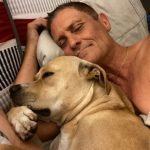 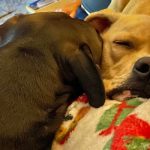 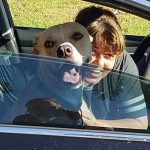 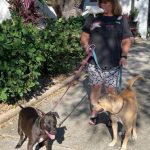