Janis, a Satchel’s volunteer, had been thinking of adopting for awhile and although she is a fervent dog lover, she didn’t feel she had the space or the lifestyle compatible with adopting a dog. Birch, an FIV cat, had been living comfortably outside for four years at Satchel’s, but he had recently lost his feline buddy Mindy. Although he loved people and greeted every visitor with purrs and leg rubs, he sometimes appeared to be lonely without Mindy. Janis, who had cats in the past, decided that she was interested in seeing how Birch would do inside. She was already fostering Sam, who is also FIV and therefore the two cats would be safe together in the same house. Janis decided to foster Birch to be sure he and Sam could get along and slowly over time, with love and lots of patience, it was a success. Birch adjusted very quickly to a life indoors and his official adoption was a happy day for all. Birch and Sam were getting to know each other, but sadly Sam passed away about two months ago. Birch seemed to be looking for Sam and Janis then decided to foster Ace, another FIV cat. Janis is going through the same process of letting them get to know each other and things are going very well. Birch is absolutely loving life with Janis. He loves to play and has many toys that he enjoys. One of his favorite activities is pushing golf balls and ping pong balls around the house like a game of soccer. He loves to explore the empty boxes and bags that Janis places around the house and enjoys watching TV, although he hasn’t decided yet what his favorite show is. Ace has been observing Birch’s activities with interest and Janis said that she has been hearing some “unusual” sounds during the night. It appears that Birch and Ace are up to some adventurous nocturnal feline mischief. She awoke one morning to find Birch and Ace both on her bed in different spots so they are quickly becoming buddies. Birch loves to be involved with everything that Janis is doing; watching her cook, sitting on top of papers when she is working at her desk and any other tasks he is able to help with. Birch is also quite the chatterbox, especially when Janis walks in the door; perhaps inquiring as to what games they might want to play now that she is home. Birch certainly has a purrific temperament and sometimes it may seem as if he is a “dog in a cat suit.” This is a very happy success story for everyone involved and Birch could not be a happier and more well adjusted cat living a life full of joy and love with his fabulous Mom and foster brother Ace! 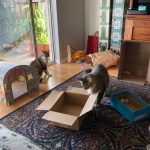 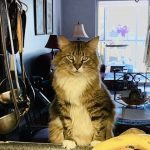 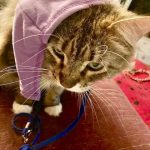 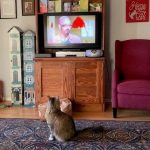