Jared and Breena had just moved back to the area and were exploring some of the stores in the plaza. They went into Pet Supermarket wondering if there were any kittens for adoption where they met Leia. After spending some time with her, they loved her demeanor and her story. They kept thinking about her and approximately a week or two later returned; saw that she was still there and decided to submit an application. When they brought her home, they thought that she would need some time to adjust and would want her own space until she felt comfortable with them. But the transition turned out to be amazingly quick and Leia was exploring, playful and cuddly from the moment they brought her home. She is doing fantastic and loves her cat tower where she is able to observe the entire room. She loves string toys and received many for Christmas, as well as little mice toys and other things. For Christmas a family member sent them a welcome home package for Leia, which included a laser pointer which she has been absolutely obsessed with running around the house chasing it. She is very vocal when expressing what she wants; waking them in the morning and they joke that she’s yelling at them to feed her breakfast. After that Leia will go in and snuggle up on top of Breena for cuddles. Although she has lots of choices to sleep, including her cat bed, cat tower and couch, her favorite sleeping place is on the fabric dining room chairs. To share their good news adoption, Jared and Breena sent out pictures of Leia to a family in the area and that family recognized Leia. They have two cats of their own and often visit Pet Supermarket where they had seen Leia while she was being hosted. They had been considering adopting Leia themselves because she was so pleasant and loving! They have now visited Jared and Breena’s home to spend time playing with her. Another great match made for a very happy Leia who is fitting in perfectly with her new family. 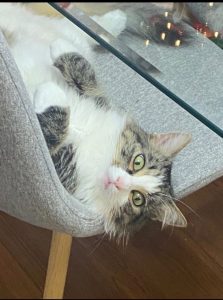 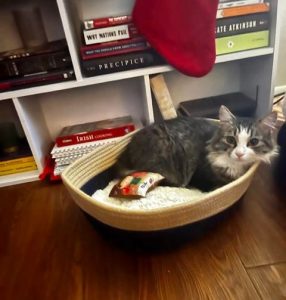