Mary’s dog had passed in April and as a follower of Satchel’s Facebook page, she began looking at the dogs up for adoption. She saw Ajax’s story and decided she wanted to give him a forever home after meeting this sweet boy. During the first few days in his new home, he often hid under the bed but would venture out cautiously and soon became buddies with Olaf, her mother’s dog who lives with them. Jax was getting comfortable with Mary, but was nervous about new people and “scary” things during walks in the neighborhood. He was just beginning to make some progress when Hurricane Ian hit. Mary’s yard was completely under water and her driveway was blocked off after the hurricane passed through. Jax was terrified when he saw this completely transformed environment. As the water began to recede, he still refused to go out to potty and he also became food aggressive towards Olaf. With LEADSRQ’s help, Mary began working with trainer Constantine to help Jax overcome his fears. Constantine took Jax to the Celery Fields, PetSmart and Phililppi Creek Market to expose him to new things and taught Mary how to walk Jax safely and confidently in her neighborhood, guiding her when Jax froze or pulled to get back home. It has been a slow process, but Jax is making great strides. He has not had any more accidents in the house and as far as the food aggression, Jax happily eats his meals in his crate with Olaf in a different room when the bowls are out. With Mary’s love and patience and Constantine’s guidance, Jax will continue to progress and he is a very lucky dog to have found his forever home with Mary, her Mom and his canine sibling! 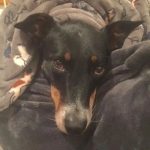 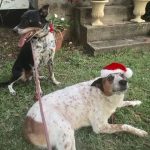