Satchel’s rescued Millie from Sarasota County Animal Services in December of 2021. This beautiful, petite girl was absolutely terrified of everything and everyone. Millie would cower in the back of her kennel and urinate if anyone opened the door of her kennel. Millie soon entered Satchel’s Woof Pack program with leader Judy and, one step at a time, became less afraid and more trusting of humans. Not wanting to leave the kennel, became not wanting to leave the gate, then not wanting to leave the driveway, then okay getting in the car but not wanting to get out of the vehicle, to home visits with Judy. Patience and time is so important with these babies who have clearly suffered some kind of trauma in the past. Then, in the fall, Millie joined our playgroups and quickly became the official greeter of the group.
Her world was now wide open! She wasn’t afraid to meet new people, go off the premises, and loved playing with other dogs. She was ready for her forever home!
Janet, a past adopter, came to Satchel’s looking for a shy pittie who would get along with her senior dog. Having several meets with various dogs, Janet always went back to Millie. On New Year’s Eve, Millie went home with Janet to celebrate 2023 and her new forever home. Congratulations to you both! 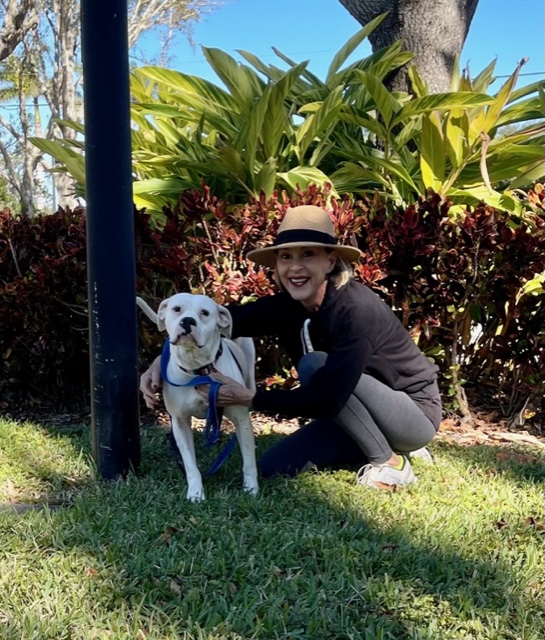