Adoption follow up, thank you Judy!
Nichole had heard about Satchels through a friend who had adopted a Satchel’s dog in the past. Nichole and her family were ready to adopt since the passing of their cat and saw Spike’s photo on line. Now known as Scotty, after the Star Trek character, he was the last kitten to be adopted from the litter and is living life to the fullest. Mom says he is extremely curious and inquisitive and during his explorations, he scatters his numerous toys throughout the house. He loves to sit on top of the covered fishbowl and paw softly at the side of the glass. He also has taken a liking to a small feathered crown which sits atop a stuffed animal. Every time that Nichole places the crown on top of her head, Scotty leaps onto the back of the chair and quickly removes it to put with his own toys. Scotty has recently been fit with a harness and is learning to leash walk so he may safely explore the outside world. He is a persistent little guy and every morning at 6 am Scotty will begin to meow very loudly until Nichole gets up to feed him. He insists that Nichole be on his schedule and again at 5 pm, he will do the same for his dinner. Nichole has a crystal bowl which produces a hum when circled with a mallet. When Scotty hears the bowl start to “sing,” he hops into the bowl and swats around trying to “catch the sound.” Scotty is loved dearly by his family of five and is giving them much laughter and delight in return! 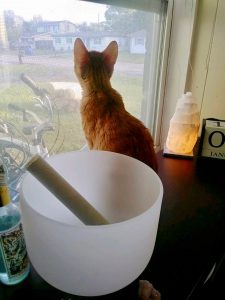 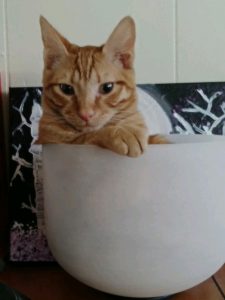 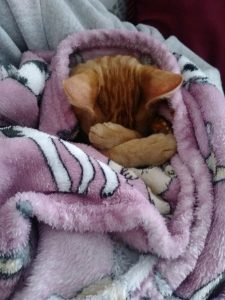