Meghan and Jeremy’s 9 year old pittie Moose had passed in 2017 and three years later they were ready to adopt. Meghan had grown up with boxers and Jeremy had grown up with American Bulldogs so they have always loved the “bully” breeds. Meghan saw Spot’s beautiful photo on-line and his description sounded perfect for her family of three boys, ages 2, 5 and 8. She immediately filled out an application but did learn that Spot had other people interested in him. Traveling from Lakeland, they came out to Satchel’s as soon as possible to meet Spot and fell in love. They were on “pins and needles” waiting to hear if they were to become Spot’s new family; fortunately everything fell into place and Meghan said his adoption was their early “Christmas Miracle.” Eleven different names had been suggested by the family members for him, so Mom chose the top four and everyone got a vote! Now known as Rex, his first few days at home were a little challenging. Rex would not walk on the vinyl plank and wanted to stay under the table where there was carpet, so the boys set up a teepee for him on a rug that he loved. Until he could become accustomed to the feel of the flooring, Meghan made a pathway of beach towels leading to the bed, so his paws would not touch the flooring. With lots of patience and encouragement, Rex began to venture out and slowly became accustomed to the feel of the floor. With his Mom, Dad and the boys to love, cuddle and play with him, Rex has made tremendous progress. He loves his big backyard and adores a good game of tetherball. He has met Meghan’s parents who live close by and adores them. He loves to be close to Meghan when she is standing at the sink doing the dishes and makes himself comfy lying on her feet. He recently had a visit to the vet and has already become a staff favorite. Meghan says that he has made their lives sweeter and they hit the “jack-paw-t” with Rex! 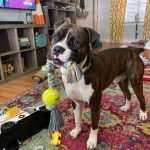 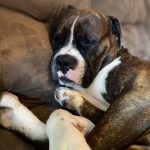 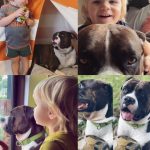 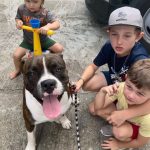