Josh had been looking for a dog for awhile and said that one of his prerequisites was to adopt from a “No Kill Shelter”. He chose Satchel’s for that very reason and went to visit with a few of the dogs. When he met Huckleberry and learned that he had been there a few months, he knew Huckleberry was going to be his new buddy. Now known as Barry, he is living a great life with Josh, his roommate and a feline sibling. Barry is super well behaved and gets along fine with Maave, his feline sibling, just preferring to ignore her. He loves to follow Josh around the house and is a great cuddler when it’s time to relax. Barry loves meeting Josh’s friends and one of his favorite things is when everyone comes over for Game Night on Sundays. Josh said that Barry loves all of the attention and gets along great with his friends. Barry hit the jackpot with his new Dad and
Josh said that he feels very lucky to have adopted Barry. 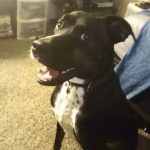 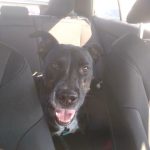 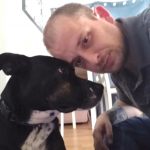