Debbie and Lorraine’s senior pittie had passed away last year and they were ready for a new companion. They had been to a few rescues and had also been searching on line when they came upon Satchel’s website. Debbie said she was looking for a dog around 5-6 years old and went to Satchel’s to meet a few dogs that might be a match. Although Azalea was 8 years old, a staff member convinced them to meet her also. Turns out that it was Azalea’s lucky day as they fell for her sweet temperament quickly. She is doing great and loves her hour long walks twice a day. One of her favorite activities is car rides and Azalea always rides up front when it’s just Debbie. When Debbie and Lorraine have front seat priority, Azalea will take a back seat but insists on placing her head right up front between her two Moms. Azalea likes to be in the same room with her parents so she has three beds; one in the bedroom, living room and den. She loves to be comfy in all of her beds; but her favorite place is in the lap of Debbie or Lorraine. Debbie said, ” I think she loves it here and I don’t know how we did without her. She is the sweetest gift we’ve ever gotten!” 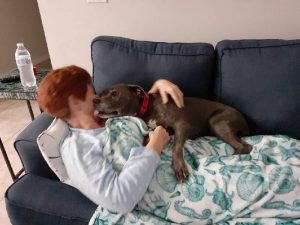 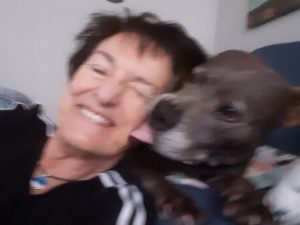 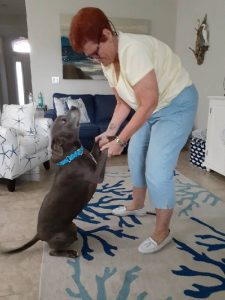