Happy Landings for Zephyr (now Figgie) – 30 day adoption follow up – thank you Judy.
Zephyr, now known as Figgie, had spent the past ten years living at Satchel’s. Mom was not actually looking for a new pet since their senior dog had recently passed, but she and her daughter were shopping at Target and her daughter convinced Mom to stop in at Pet Supplies Plus. They saw Zephyr immediately and the Satchel’s volunteer opened his crate so they could meet him. He put his head out to her daughter and the volunteer said that they had never seen him do that before. Mom read his story; her heart went out to him and she decided that she wanted to make a difference in his life. They took it very slowly at home as they have another rescue cat, Cracker Jack. Figgie stayed in his crate for the first few days and Mom’s daughter spent lots of time talking softly to him. Slowly they became very bonded and he began to bravely come out of his crate. They kept the two cats separate with a baby gate so they could get to know each other safely. Figgie now loves getting on her daughter’s bed and recently has been given the run of the house. This past week Figgie and Cracker Jack have been seen hanging out together. Figgie received the best Christmas gift a cat could get and Mom says that every time she sees Figgie, it brings a big smile to her face. What joy to know that 11 year old Figgie finally has the love and warmth of his very own family where he can live out his years in comfort! 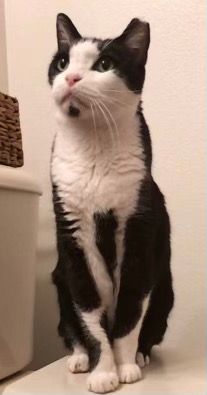