We say Goodbye to Phoebe.

We have many senior pets at Satchels, which means having to say goodbye comes more often than we would like, but unfortunately the cycle of life must go on. Last week was Phoebe’s turn to cross the rainbow bridge and run free on the other side. Phoebe was diagnosed with a heart condition a few months ago and it soon became apparently clear that the disease wasn’t going to take long to win the battle, so one of our staff members, Kris, opened up his home to Pheebs. Here’s a tribute to our baby from Kris.

Before Phoebe came home, she lived at the shelter for 3 years. During that time she stole the hearts of literal strangers with just a peek of her adoring face. A volunteer told me after her passing “I didn’t meet her until recently, but it was just something about her face that drew me into her”. That’s something you heard often about Phoebe, she’d also never met a stranger. Due to her unfortunate life before Satchel’s she had surgery that left her with a pouty lip, which ended up being her signature accessory. That’s what I will miss the most about her, and I think a lot of you will too. The way she’d look up at you for anything, pouty lip pouting hard, though it was mostly for food or an adventurous walk with lots of good sniffs. Home life with Pheebs was a different story, she was a different dog. She blossomed here, potty trained herself, made a bunch of friends and lived to the fullest. The first three days I’m certain she thought pizza came from the couch, which quickly became her favorite thing ever. She must’ve lived with a goat and maybe a cow before she came to Satchel’s because she had the funniest qualities of both. Phoebe climbed everything and anything she could get up on including, but not limited to, the hot stove, her doggy house, and my computer desk which apparently didn’t need to have a computer on it anymore either, haha. For the first time I saw her run and jump, play and chase with other dogs and people, sometimes even by herself. She’d take advantage of the whole yard and didn’t want to go in until she was absolutely made to, even in the rain! You’d have to go out there and corral her in. I was always laughing with Phoebe (Philbert). Her affection was the sweetest, laying her head on me and giving her lovings, it made me feel so warm to have those moments. Even though Phoebe’s ultimate end was her heart, I’ve never met one that had so much happiness and light to give. No matter what, she was happy. And I’m so thankful she shared some of that with me and everyone she met. I’m so thankful to have had the chance to get to know Phoebe.
I love you Princess PB, see you on the other side.

Thank you Kris for giving Phoebe a “real” life for a few weeks. You were indeed her hero. From all of us here at Satchel’s, RIP sweet, sweet girl, you will never be forgotten. 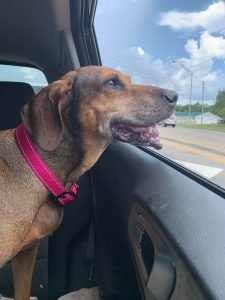 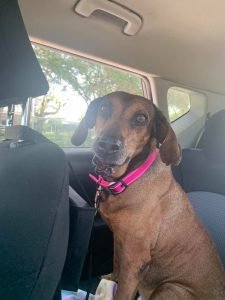 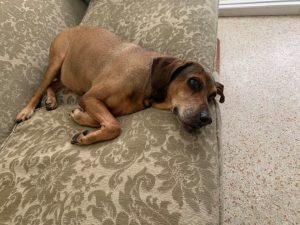 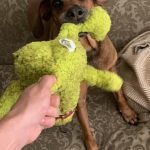 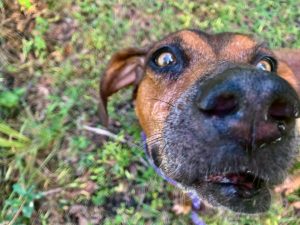 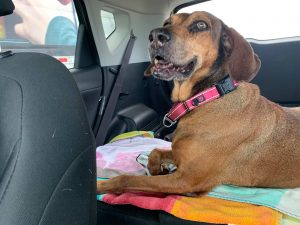