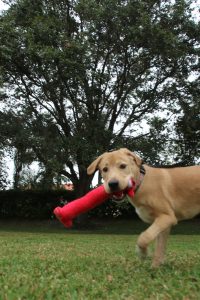 Tanner, only 7 months old, was hit by a car on 7/30/17 and he was rushed to the ER but his owners were unable to afford the care he needed.  They signed him over to Manatee County Animal Services in hopes to give him a second chance.  When Satchels received the call we rushed to pick him up and brought him to Beach Veterinary Clinic where he underwent emergency surgery to amputate his tail (it was badly mangled).  Once he was stabilized he underwent surgery to place a pin in his fractured leg.  3 months of cage rest wearing that dreaded cone his leg was healed and the pin was removed.  A few days later and the cone came off.  Tanner has been making up for lost time running and playing like a normal 9 month old puppy does.  Now he has a second chance at a fabulous new life, which he thoroughly enjoys.  He is so grateful for Satchels Rescue – Rehab – Rehome Program.  Please consider a donation to save more dogs like Tanner.  Thank You!  www.satchelslastresort.org/donate