Back in January, we were contacted by a couple who were concerned about a neighboring dog who had been abandoned by his family and was living in the backyard. They were feeding the dog and offered to help provide for his care at Satchel’s if we were able to take him in. After meeting this boy, no one could have said no. A young dog barely a year old and an absolute sweetheart. And, as is almost always the case with a dog that has been kept outside, Roscoe tested positive for heartworms. Thank you Kim and Garry for providing Roscoe with initial vet care until we were able to take him in and get the treatment for his heartworm disease started and also for continued help with his care during his time at Satchel’s. Fast foward to mid-March when Din and Sara met Roscoe and immediately fell in love. Roscoe was a happy boy when he was able to leave the shelter as a foster dog until his heartworm treatment was done. Treatment is finally complete and this past weekend Din and Sara made Roscoe an official member of their family. Thank you Din and Sara and congratulations to you all including Roscoe’s new feline siblings! You guys will have a long, happy llife with Roscoe. 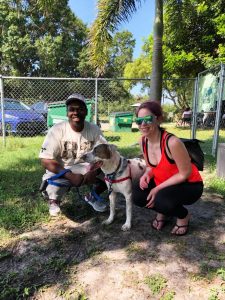