Sam found his way to Satchel’s a little over a year ago when his owner passed away and he was left alone in the home. With the help of our local county shelter, Sam was trapped and brought to Satchel’s. Sam had lived with his person for a few years, but according to family members was always very shy in the home. Sam tested posivite for FIV which made him a hard adopt – senior, FIV+ and extremely shy. After a few months at the shelter, one of our volunteers offered to foster him to help socialize him in the hopes a forever home would be found. Over the past few months, Sam’s health has been declining. Diagnosed in renal failure several months ago combined with his FIV status made it hard for Sam to fight and last Monday, he let us know his time here was done.
Here’s a tribute from Sam’s foster mom, Janis.
“My little grumpy guy Sam passed away this past Monday. Sam was a foster in my home for 9 months. I knew he would be a challenge and that I would just have to be patient. He did have a problem adjusting and spent the first three days behind the toilet. Then later, lots of time behind the couch. But slowly he came out of his shell. The best was when he would fall asleep on my lap and also let me brush him. When Birch came to live here, I noticed Sam would copy things Birch would do. He never touched the cardboard scratcher but when he saw Birch do it he decided he would too. Sam was not much into playing but when he saw Birch having so much fun with a ball of yarn he came over to check it out. Although Birch and Sam never got cozy, I can tell Birch misses him as do I. I wish I could have given him more time. Who knows how far he could have come. Loved that little curmudgeon.”
Sam, you may not have found an official forever home, but you had a forever home with Janis. Thank you Janis for giving so much love to Sam for his last few months on earth. Rest in peace darling little man. You will be missed by everyone who knew you. 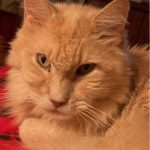 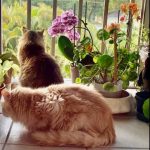 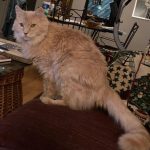