Merry is Home After 7 Years!

After 7 years, Merry finds her forever home! It was a couple of days before Christmas 2012, when we went to a county shelter to rescue a puppy just a few months old. “Who is this dog in the kennel beside her?” we asked. Seems she was a young girl, not much more than a year old and was scheduled to be euthanized as she had heartworm disease. We couldn’t let that happen, so off we went with both of the dogs, calling them Merry and Christmas (Chrissy) for short. “Let’s hope they get along because we only have one kennel available” was our thought. It was meant to be. Merry mothered Chrissy like she was her own baby. With Merry’s motherly instincts, Chrissy became a perfect dog and was easily adopted. Merry had her own challenges having to go through heartworm treatment but she took it like a champ and was soon ready to find a home of her own. She briefly found a home in 2014, but separation anxiety took over Merry, and it became too difficult for her new person to keep her. Merry found herself back at Satchel’s. Since then, we have been looking for the right home for Merry. A couple of weeks ago, our dreams came true. With tears of joy, we all said goodbye to our special Merry hoping her separation anxiety would be calmed by having her new canine sister, Luna, at her side. The pictures we are receiving tells the story – Merry has found her forever home and is now living the life she deserves. We love you Merry! Thank you Stacie, Russell and Luna! 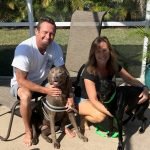 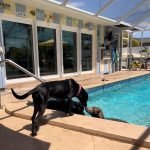 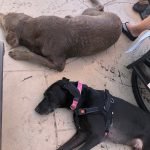 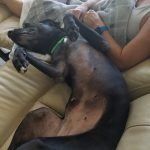 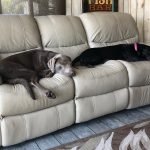