June has been faced with some tough times in her short life but this past weekend she found her people and went home to stay. In the summer of 2018, June was in a county shelter, when we got a call to rescue her. It become clear quickly that she was an extremely sick little girl. Diagnosed with distemper, her prognosis was not good. We prepared for the worst while we continued to give her 24 hour around the clock care. It was highly unlikely that June would survive but, if she had the will to live and fight, then that’s the least we could do for her. And survive she did. June was adopted a few months later to a woman she loved dearly, going everywhere with her, and acting like a service dog, although not professionally trained. June’s happiness was short lived as the woman found herself on hard times and June found herself in a lonely kennel at Satchel’s. Fast forward a few months and along came Barbara and Ed. It was love at first sight and we all knew this was the right home for June where she would be loved and happy again. We all shed a few tears when June left us as she was such a special girl who deserved to be a queen in her own home. You’ve earned your crown and found your palace now June! Thank you so much Barbara and Ed, enjoy every day with June. 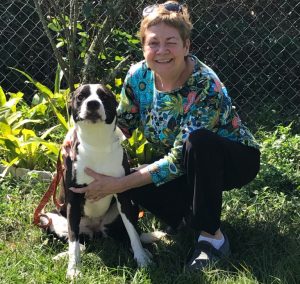 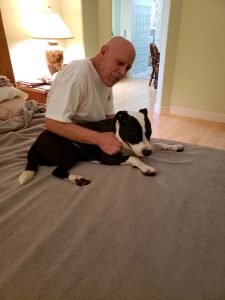