Congratulations to Dodge and Diana! Dodge joined the Satchel’s family 4 years ago showing a major distrust of people. He immediately found “his person” bond with staff member Diana. Even though his mistrust of strangers continued, his unbreakable bond with Diana grew stronger. And then one day Diana left the area and Satchel’s employ… Dodge missed seeing his person several times a week but would embrace her and show his love for her whenever she was able to visit. Last month, the stars aligned, and everyone knew it was Dodge’s time to go home with Diana. Dodge still struggles with strangers and Diana will forever have to keep her guard up when he is out with her, but this boy is now living his dream with his person and, together, they will make it work. 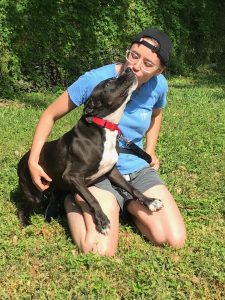