Bandit is ready for his forever home!

Bandit found his way to Satchel’s a couple of months ago when his young family realized he was a little more than they could handle with a new baby on the way. He was also in need of medical treatment which, financially, they weren’t able to take on. He quickly became a member of the Satchel’s family and was given all the medical attention he needed. He continues to be treated for a skin condition which may prove to be an on-going medication requirement. Bandit is an athletic boy who LOVES balls of any kind. He particularly loves rolling the large red plastic ball around in our play yard and enjoys chasing tennis balls to play fetch but doesn’t quite understand that you have to give it back to the “thrower”. He would love a yard of his own where his family would spend time playing with him to help burn off some of his energy. He is quite the jumper, so we would recommend a high fence around the yard and, as with any dog, we wouldn’t recommend he be left outside alone for any amount of time. This strong, affectionate boy is only 2 years old and still has a lot of puppy in him. He needs some training and would do best in a home with an experienced dog handler. After some training, he would likely make a good jogging companion or perhaps would like to try Agility or Fly Ball. For more information on Bandit or to make an appointment to meet him, please submit the adoption application (no commiitment) found on our website, www.satchelslastresort.org, and an adoption counselor will be in touch. 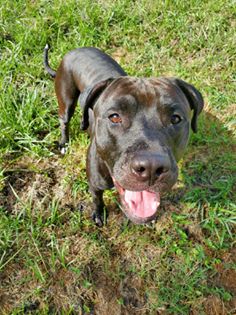 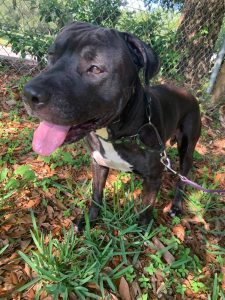