Congratulations to Vicki and Candy Cane! Young petite Candy Cane was quite feral when she first came to Satchel’s with her own little kitty 2 years ago. Candy Cane was adopted last November but the open door was just to tempting for her and, after 6 months in the home, she managed to escape. It took several days for Candy to be trapped and the joint decision was made that it wasn’t the right home for her. So Candy has been back at Satchel’s for several months now just waiting patiently for the next opportunity for the perfect home to come her way. Along came Vicki. After several conversations, the decision was unanimous that Vicki and Candy Cane were made for one another. Cara is Candy’s new name and after just a few days in the home, she started to pop out for a little petting and here we are, 10 days later, and Candy Cane has found her favorite spots – sleeping under the bed, sitting on the lanai, and looking out of the window. Vicki tells us that Cara jumps on and off the high window sill like it’s ground level. In Vicki’s words, “She is such a dear, sweet cat.” Thank you Vicki! 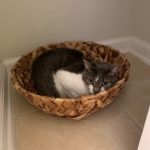 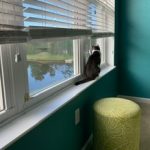