Last Sunday St. Margaret of Scotland Episcopal Church (located at 8700 State Road 72) held their yearly Blessing of the Animals Event. Again this year, it was an honor for Satchel’s to take part in this blessing where each animal was individually blessed. In her first social appearance, Poppie represented Satchel’s very well by “singing” during the hymn and “saying” amen multiple times during The Lords Prayer. Poppie was thrilled will the truck load of donations of food, treats and various iems from the attendees. Thank you so much to everyone at St. Margaret of Scotland Episcopal Church – see yo

u again next year! 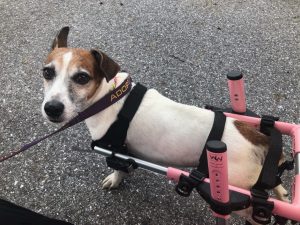