Last week the hearts of so many staff and volunteers were again broken when we had to say goodbye to Kamper. Kamper was surrendered to our shelter last October by a family no longer able to care for him in their current living situation. Although it was heartbreaking for his “mom”, she knew Satchel’s was where Kamper needed to be until he found his forever home. Kamper became a favorite of staff and volunteers at Satchel’s, especially Anne who regularly took him to off-site adoption events, to her house to spend some overnights, and to many outdoor adventures. Unfortunately in April, Kamper was diagnosed with terminal cancer and the search for a a fospice (foster hospice) home immediately started. Thank you Doug and Jean for stepping up and taking this boy into your home to spend his final months and for opening your home to other important people in his life – his former “mom” and Anne. The pictures show the love.
Here’s a few words from Doug:
“Jean and I took Kamper in fospice knowing it was a one way ticket. We knew and were completely prepared for the final destination. We’d give him a home and spoil him for the few months he had left. What we weren’t prepared for was such a loving, caring, and charismatic personality he had. The way he pranced around smiling and always looking for a lizard to torment. He could destroy a chew bone, toy, or pillow in a heartbeat. Ice cubes were his favorite. He loved to sleep late but was always excited about his early morning walks. And the rides in the Jeep during the evenings, that was his favorite!! He had a small group of fans that greeted him every evening with treats and hugs. Always eager for a new adventure or experience. People will say we gave him a wonderful life the past 5 months. Truth is…HE gave us a wonderful life. It’s not goodbye bub-bub, it’s see you later.”
RIP precious boy. You will be missed dearly and loved forever. Until we meet again my friend… 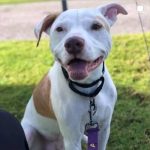 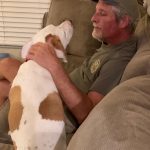 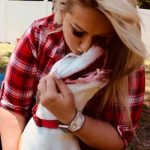 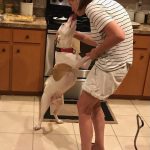