Pepper wasn’t my first choice to foster, but she needed a temporary home and quickly, so I agreed to be it. You see, I volunteer in the fundraising area of Satchel’s and leave the critter raising to the other folks. I am also a HUGE English bulldog fan and never having had a Frenchie before, I knew I had some homework to do. Pepper settled in quite nicely however and before long, won the heart of Rocky, my EB. They played almost constantly and rather loudly (I later learned that was a Frenchie thing), so working from home became a bit challenging, but the laughs were worth it I suppose. Soon, she ruled the roost (another Frenchie thing) and had Rocky and the four felines (3 of the 4 are Satchel’s alumni) in step with her beguiling ways. Rocky and my son were deeply in love with her, however I was trying with all my might not to become a foster failure…again. Then, there was peace and quiet when she went to get spayed. Then, word got out that Satchel’s had a spunky Frenchie and interest grew. As a foster mum, I was to have first pick and while I seriously mulled over how quiet and peaceful my house would return to if she were rehomed elsewhere, I just couldn’t bear it. Quite honestly, I, too, had grown rather fond of her stealing Rocky’s toys, chasing rays of sunshine, and waking me up earlier than I had ever imagined that I would. Now, we are all on Pepper’s schedule (another Frenchie thing). We all adore her and she in turn, adores us in her bossy Frenchie way. Thank you, Satchel’s, for taking a chance on a spunky little French bulldog and allowing her to rescue us or is it the other way around? 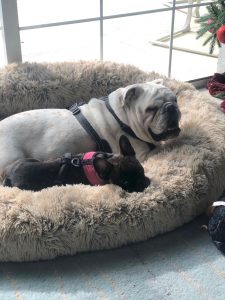 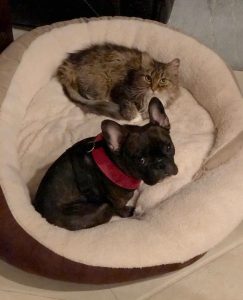 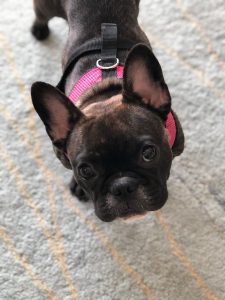