Last October, Squeaky suddenly showed up at Luanne’s back porch. Her husband had passed away shortly before that and Luanne felt that this sweet young cat was a godsend and would give her some comfort. Although she was not feral, she was a little wild and Luanne felt that she had been mistreated. She fed Squeaky and spent a lot of time bonding with her. It was not long before Luanne discovered that Squeaky was pregnant and shortly thereafter helped her deliver her kittens. Luanne was in the middle of relocating during this time period and Satchel’s took Squeaky in until Luanne was able to move into her new home. Luanne was separated from Squeaky for about six weeks and was thrilled when she was able to pick her up and give her a permanent home. Squeaky is coming out of her shell; learning to relax and has come a long way since she was first discovered. When she came into Luanne’s life last year she barely meowed. Sometime thereafter, she began to do a half meow which sounded like a squeak, which is why Luanne named her Squeaky. She is a happy kitty; loves her toys and spending time on the lanai. Squeaky is also becoming acquainted with a small dog belonging to Luanne’s friend and hopefully in time they will become buddies. This love match has been a blessing for both Luanne and Squeaky and has provided joyfulness all around! 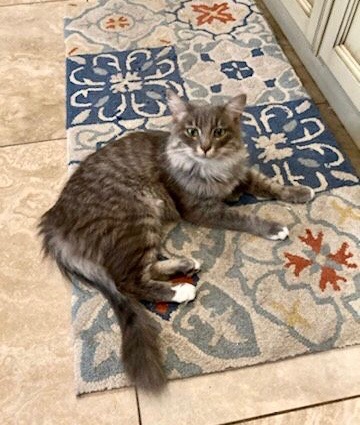