Jane and Kirk had previously adopted Larson from Satchel’s in March of 2017 and later had rescued a second dog, Carmello. Jane inherited her love of shelter dogs at an early age from her Dad. As a child, her Dad would bring shelter dogs home and he taught Jane and her siblings how to work with shelter dogs, explaining that it was a different process than training a dog who had not been neglected, abused or abandoned. Jane understood that it took plenty of love, time and patience. Since Jane’s retirement, she and Kirk have enjoyed staying active spending time with their dogs and had decided it was time for a new sibling for 9 yr. old Larson and 4 yr old Carmello.
While searching for a dog, Jane said that she saw the Facebook post of Piper visiting Mickey Ds staring at a hamburger and she was moved by the excitement in Piper’s eyes. It reminded Jane of growing up and special times going out for a meal with her family. It was also a clear reminder that the little things in life are precious and matter the most.
When Jane and Kirk initially met Piper, she was worried and uneasy due to her “stranger danger” and lack of confidence. But this did not deter them and they understood that it would be a gradual process. The next step was to bring each of their dogs separately with one person at a time. Having Larson and Carmello with them helped Piper to feel more comfortable with Jane and Kirk and within a few weeks, Piper was ready for a sleepover with them. Piper was happy to see the dogs that afternoon and enjoyed playing with them at the house.That night she snuggled in bed with Jane and by the next morning Jane said that she could tell that Piper knew this was her forever home.
Jane says that Piper has so much energy and loves to wrestle with Carmello whenever she gets a chance. She loves playing with toys and can’t wait to see what’s inside when the BarkBox arrives. Another favorite activity of hers is playing in the rain puddles and she has recently shown interest in the pool. They have started teaching her to swim with Kirk holding onto Piper in the pool while her legs start moving instinctively. This precious girl has gone from nervous and insecure to happy and confident with love and guidance from her wonderful parents, Jane and Kirk. Piper also adores her canine siblings, Larson and Carmello, who played a large part in building Piper’s confidence. Thanks to Jane and Kirk who never gave up on her, Piper is surrounded by love and will continue to grow and thrive each and every day! 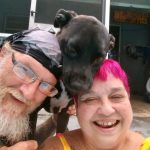 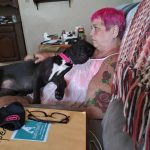 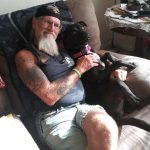 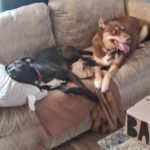