Daniel had been looking for a dog for awhile and had met three other dogs at various shelters, but in each instance that particular dog was already spoken for. He started volunteering at Satchel’s and had spent some time with Loki and decided he was a great match for him and his ten year old son. But Daniel soon learned that another couple had already put in an application for Loki. For the fourth time, Daniel was disappointed, but the next day much to his surprise, he learned that the couple had decided to adopt a different dog. It was another “meant to be” adoption as it was a perfect match. Loki is a young active dog and he is having the time of his life with Daniel and Ben. Ben gets up early every morning before school to take Loki out in the morning and then Loki takes another morning walk a little later with Dad. Loki’s excursions include the dog park twice a week, Ace Pet Resort for daycare and Myakka River Park. Ben has also been working with Loki to train him to trot alongside him while he rides his hoverboard. Loki is ready to settle down in the evening as he has had lots of stimulating play and he happily takes turns between sleeping with Dad and Ben at night. A wonderful forever home for Loki and a great companion for Ben to grow up with! 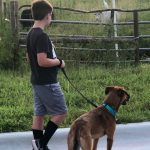 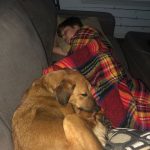 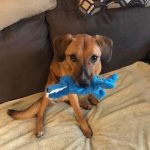 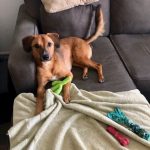