Christine has adopted many rescue dogs over the years, having been inspired by her grandmother from a very young age. Many of her rescues have been dogs with medical issues and when she saw Governor’s story on Satchel’s Facebook page, she knew she had to meet him. Governor had severe skin issues and needed eye surgery, but after meeting this precious boy, Christine and Michael fell in love. They decided to foster him to be sure he could get along with Bella and Maddie and after a few weeks, Governor’s adoption was finalized. Michael often spends his time on the road as a trucker with Bella as his traveling companion and the intent was that Governor (now Govenor) would join them. It took about a week for Bella to accept Govenor and they get along great at home, but Bella has decided that she would rather not share her space with Govenor on the road. Govenor is very content staying home with Christine and Maddie. He needs medicated baths and eye drops for the rest of his life so he is getting plenty of TLC from Christine. He has chewed through a few of his cushy dog beds, so Christine has ordered him a “chew proof” dog cot. Being a bulldog, he is often stubborn and may sulk if he doesn’t want to do something, but he is gentle and loving and that stubborn “bulldog personality” is what makes him so adorable. Govenor is getting fantastic care and has a wonderful new life with Christine, Michael and his canine siblings! 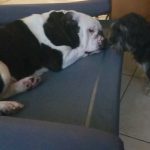 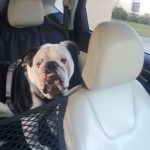 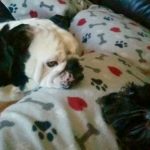 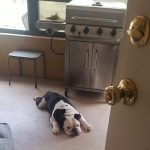